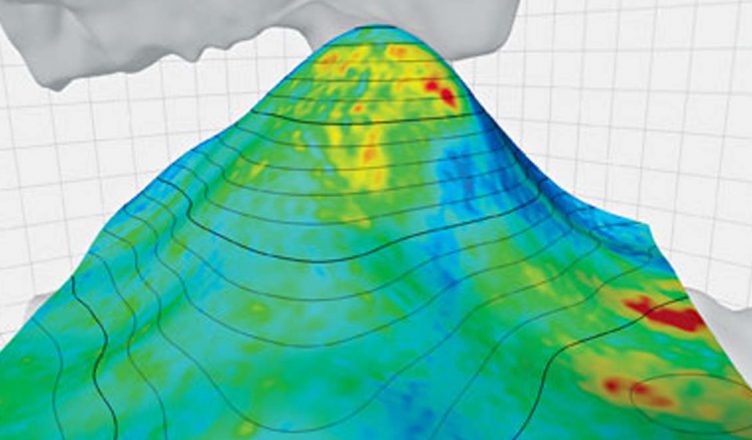 Seismic inversion, or seismic interpretation as it was formerly known, is an essential part of the geological imaging process. Many geologists may not be fully aware of how seismic inversion works, but it can be vital to getting the right read on an area’s geology and hydrocarbon potential. What exactly is seismic inversion and how does it work? We’ll break down this data-driven process and explain how geologists use it to help them better understand the subsurface.

Seismic inversion helps us to recover information about subsurface formations when we have limited data, or ambiguous data. For example, when using surface geophysics seismic methods to image deeply buried structures or fluids (e.g., oil or water), many times there is ambiguity in what we are looking at – in other words, it’s hard to determine where one formation ends and another begins, as well as where there might be faults or fractures. This leads to questions such as: Where should I drill a well for oil? Which fault segments could be used for hydrocarbon production? How can I tell if there is an aquifer under my land before drilling a shallow test well that won’t tell me much?

How does seismic inversion solve the problem?

Seismic inversion uses information from seismic recordings to accurately assess what lies below Earth’s surface. The problem with traditional geophysical measurements, like seismic surveys, is that they only provide information on what we can see under Earth’s surface. But having images of only part of a structure can lead to misinterpretations about what we can find underground. Seismic inversion algorithms are used to interpret seismic imaging data that gives us insight into structures beneath Earth’s surface (like fluids, hydrocarbons, or structures). This gives oil and gas companies useful information to make better decisions about where they should drill next.

How this works with real life applications

Seismic inversion can have many different uses, but there are two particular ways that it can be used. The first way seismic inversion can be used is to determine what natural resources may lie under Earth’s surface. If a company wants to find out if there are any valuable minerals, gas deposits or other resources underground then they will often hire a geologist or an engineer to analyse past data, ground penetrating radar and surveys. They will use seismic information combined with these other instruments to better understand what lies below Earth’s surface. Seismic inversions not only help us find more resources on Earth, but they also help us learn about our planet as well as predict future hazards on our planet.

Seismic inversion is a technique used to gather information about an underground formation. Some questions we might want to answer with seismic inversion are what are the underground formations, where do they lie and what are their properties? Seismic inversions can be used on surface or subsurface data. Most commonly they’re applied to subsurface seismic data. Seismic inversions rely on a mass of pre-existing knowledge about rocks to interpret unprocessed data; because of that, analysis techniques tend to be very site specific, so there isn’t one way seismic interpretation works, but rather many ways depending on your needs.